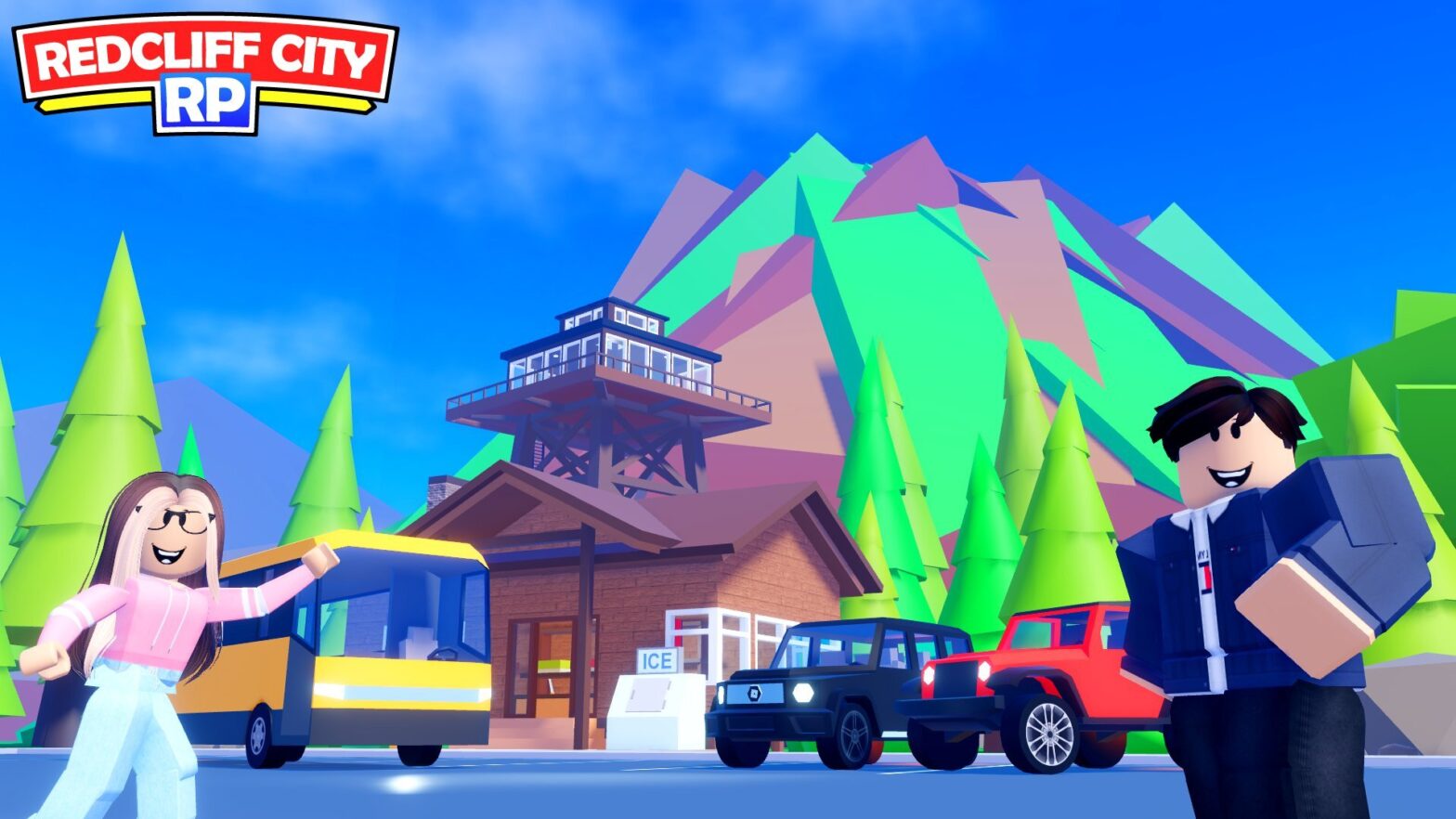 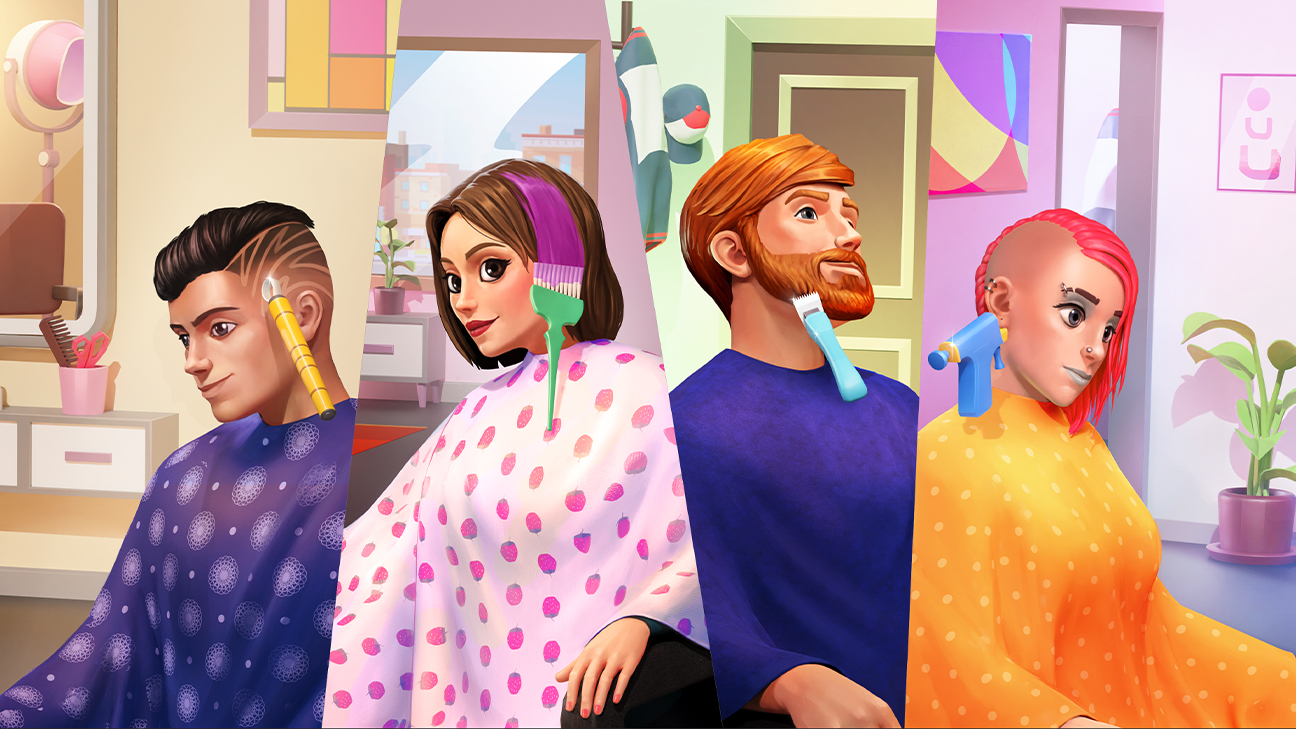 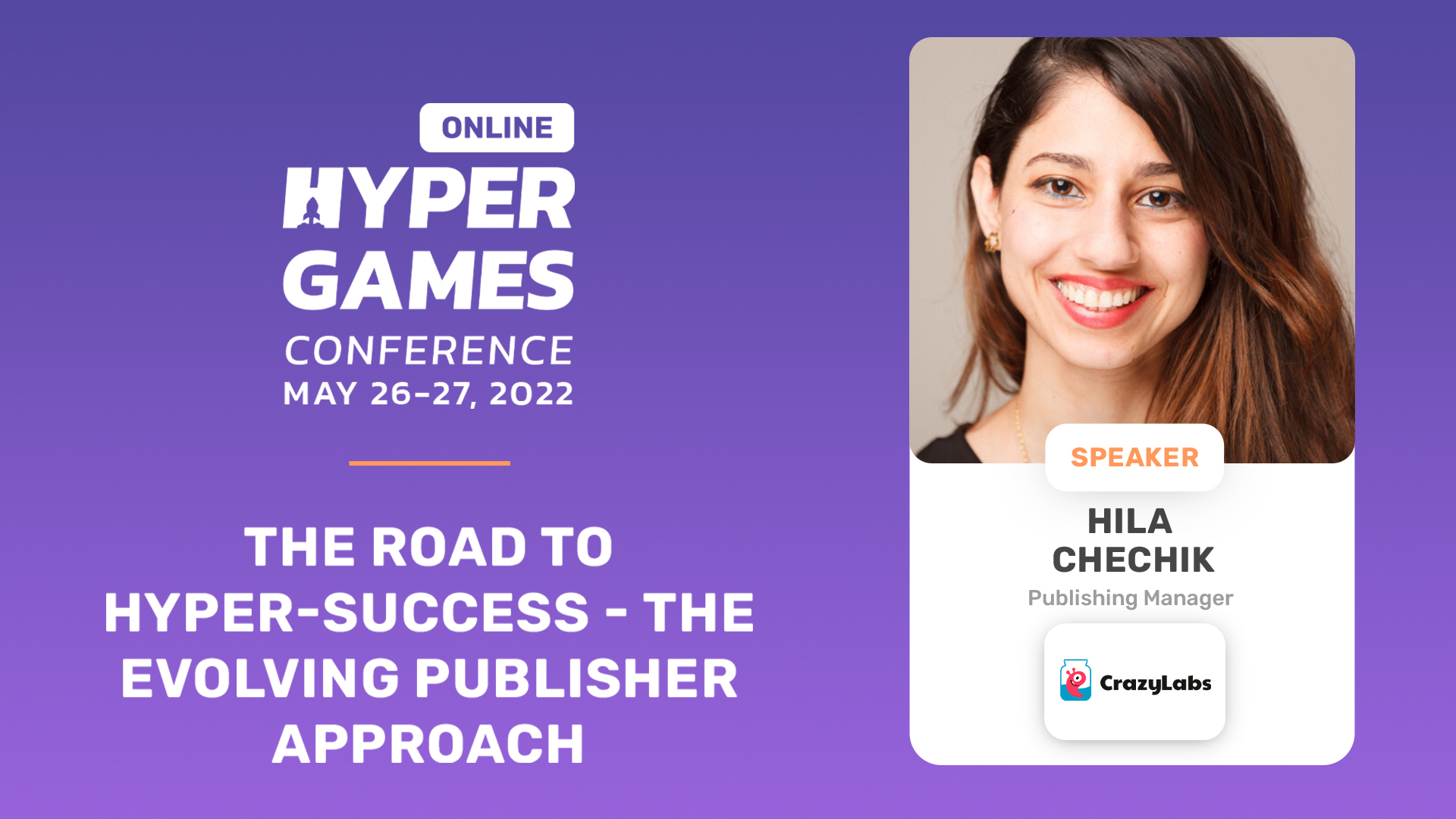 The hyper-casual mobile game market is growing every year and becoming more and more competitive. How to stay ahead and become successful in this situation? Get the answer from Hila Chechik, Senior Publishing Manager at CrazyLabs! CrazyLabs was General sponsor at Hyper Games Conference #5. You can view the lecture records on our YouTube channel.

I’m happy that you joined my session The road to hyper-success – the evolving publisher approach.

We start with a small intro and some numbers about CrazyLabs. Then I will discuss the hyper-casual market in 2021 and 2022. Then we will discuss the new publishing approach and why we need that. And we will finish with the CrazyLabs’ adaptive actions to those changes.
My name is Hila Chechik, and I’m a Senior Publishing Manager at CrazyLabs. I was the publishing manager of a number of hit games, and my favorites are Lash Salon, Frozen Honey, and String Pull. I’m working closely with developers worldwide on the next hyper-casual hit. I’m always trying to share data and knowledge with my partners and the system to get the best results.

First, a bit about CrazyLabs

We have over 5.4 billion downloads which 1.2 billion downloads were in 2021. We have 250 million monthly active users and  many games that crossed  100 million downloads. We have three main labs in the company: the hyper-casual lab, the biggest one; on top of that, we have a casual lab making casual games; and the innovation lab, which is more internal, with new, different games that we create.
Let’s talk a bit about the hyper-casual genre. You can see that in 2021  hyper-casual was the strongest game genre, while other game genres grew a lot during 2020 and COVID time. Interestingly, the hyper-casual genre kept growing with a fantastic increase of 15.4 % year-over-year, unlike most other game genres, which mostly declined compared to the previous year. And if you ask what we will see for 2022- that’s a great question!

In the diagram below, you can see the projection for 2022. And for the first time, we see that mobile revenue will cost 100 billion dollars, and mobile games will dominate over 50% of the global market. The most interesting part is that mobile games will see another rise of almost 6%. And again, this is after the significant increase during 2020 and 2021 and the COVID time. It seems pretty positive to us, and we expect hyper-casual will also increase during 2022.

The Dynamics of Hyper-Casual

After looking at the gaming market now, it’s time to understand why publishers need to keep evolving. The main important reason is that the industry changes all the time: whether it’s on a yearly, quarterly or monthly basis – we keep changing our platforms, KPIs, and the way we test.

The hyper-casual market is heavily affected by trends, so every time we see a new trend on TikTok or a new successful series on Netflix like the Squid Game, we immediately see many games trying to follow those trends. We base our decisions and the actions we take on data – data is the key. For example, in CrazyLabs, we send our market trends to report every month to our partners and our CLIK Dashboard members. In this report, you can see the changes and the trends in the market. In the last few months, we saw that simulation gains are on the rise, while runners that are still the majority of prototypes you can see here are declining a bit.  And another change is an idle arcade, the newcomer. We see a constant increase every month in those prototypes.

The changes we made in CrazyLabs and why we did that.

Last year, we’d started testing on TikTok and not only on Facebook. And why we did that? TikTok was the social media with the biggest downloads in 2021, and it seems that it’s going to be like that in 2022 as well. With younger audiences and TikTok and more dominant through females, you can see in the diagram above that for ages 18 to 34, there is only 22% female on Facebook, while 41% (almost double) are on TikTok. And we know that in hyper-casual, the majority of players are female, so this is correlated greatly, and it’s definitely the place to test your game. Personally, I’ve noticed that there are games that get better CPI’s on TikTok if it’s a game based on a trend on TikTok for sure, or even runner games many times. Puzzles and other arcade games usually get better CPI’s on Facebook. Again, it’s not science, but this is what I saw personally.

The second change we did was test day one retention and usage in the first 24 hours. Publishers sometimes don’t consider it, but this is very important data. Because if, for example, I have a game with 25-26% of retention, but 50 minutes of usage time that means that the core loop is excellent! Maybe they just finished the entire context of the game on the first day, or we need to give them another reason to come back to the game, but it’s still a  potentially profitable game. It’s really worth keeping working on it.

Third, we now have a combination of different KPIs and not specific ones, which gives our developers a bigger chance to publish their games because we know that different game genres need a different approach. Below there is a new table KPIs. Here you can see the way we work now: while there are many publishers that say that they have flexible KPIs, they usually keep the data and the decision to themselves (whether they’re planning to continue working on the game or not. But we opened that with our studios, sent it to them, and posted it in our latest case study. So each studio knows exactly where their game stands and what the expectations are.

For example, if we will go in the first row – if you have 11 cents on TikTok or 20 cents on Facebook (we’re talking about CPI) and you don’t have to have both and TikTok, and Facebook, we test them both parallel but to have one of them, you will need a minimum of 27% day one or 40 minutes 24hrs usage time. Again, you don’t have to have both, only one of them. If you have both, that’s amazing. This table considers other game genres like puzzles and other arcades, which we usually know have a higher CPI but also higher usage time and retention.

A summary of the changes which we have made that I spoke before:

I want to share with you a case of a game that never reached these story KPIs, but we still published it. The name is Multi Maze 3D, and it’s a puzzle game. On the first time that we tested, we got 76 cents CPI which is okay, but when we tried the CPI on our dashboard, we also got data for the day one retention and the usage time. We saw their amazing numbers that we couldn’t ignore, like 52% on day one and almost one hour of playing time (!). We knew this game had a lot of potential, and so we worked a bit to lower the CPI  and published it. This game is now very profitable; it has become a global success  with  30 million downloads.

Another way that you can publish a game in CrazyLabs is through our Publishing For All program. It’s usually for games with   good retention and usage, where somewhere in the process, the CPI went too high and so we couldn’t scale them: they weren’t profitable enough, or any other reason. Other publishers would kill the game, but we don’t. We still publish it.

We will do the user acquisition and the monetization. It’s not going to be on the scale like a hit game, but the important thing is that it will create a steady monthly income and a new revenue channel for the studio. We know so many times this is crucial for our studios. You can see our example of free games that we have in our Publishing For All program: Belly Clash, Roads Hill, Candles ASMR. Looking at these games, I know they are not approaching 100 million downloads but get a decent amount of downloads: Belly Clash with 10 million downloads, Road Hills with 5.4 million, and Candles ASMR with 3.8 million. But overall,  the expected revenues for Publishing For All for 2022 are close to 20 million dollars, which is a lot of money for our studios.
I told you before that it’s very important to us to be transparent, and another way we do it is with our CLIK Dashboard. Every time you test your game in our dashboard, you have endless data, and it’s all online, so for every test, for every platform, and every creative, you can see the CPI, the CVR, the budget, the clicks, etc. And this data is for Facebook, TikTok, and both platforms, Google Play and iOS.

When we move forward to retention, you also can see your data on our dashboard. You can see the level funnel, the fail rate, time to complete, starter VS complete, etc., and this is again on iOS and for Google Play. On top of that, when we publish a game, the developer can see in real-time on a daily basis so much data on this game: downloads, revenues, quarterly, monthly and daily profits, total spend, game KPIs, A/B tests, crash report, monetization and so much more. And it’s very important because we know our studios don’t publish a game every day, and they need to know what’s going on with their game and not only wait for us to tell them if something happened.

I want to introduce you to our CrazyHubs program. Everything I explained and much more is part of the CrazyHubs program. This is an accelerator program where studios get full mentoring on the hyper-casual market, how to create games, how to make successful creatives, and how to publish a game. During the 4 months of the accelerator, they get funds and facilities from CrazyLabs, so this is a great opportunity. We have hubs worldwide, and you can apply to the nearest one. We have already published five games that came from the hubs, so it’s really great. The next round started recently but studios are invited to register for the next cycle!