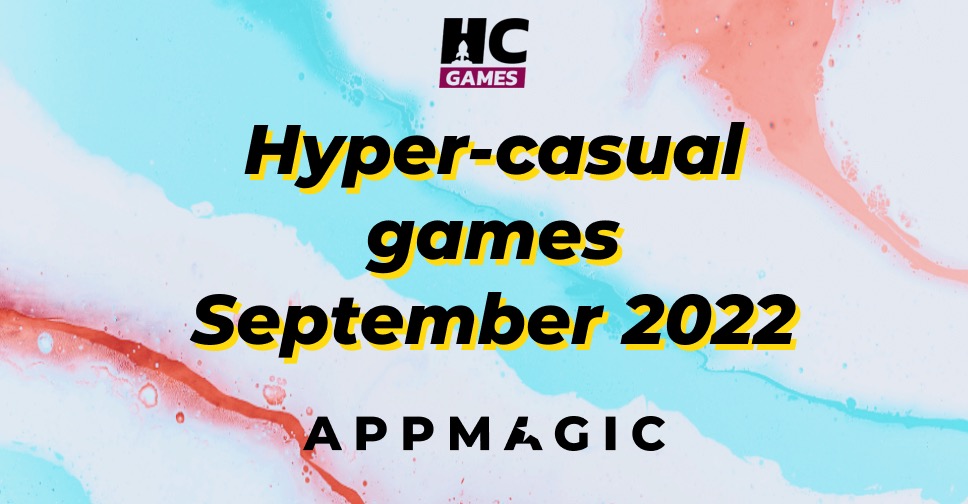 HC.Games, in conjunction with AppMagic, presents an overview of the hyper-casual games market for September 2022. This time the following companies were included in the top 10: CrazyLabs, Supersonic, GOODROID, MondayOFF, Rollic Games, and the total number of installations of the games from the top almost exceeded the 1 billion mark.

The game from Supersonic studio opens at the top, taking first place. Bridge Race was released on February 13, 2021; it has collected more than 14 million downloads. The game aims to compete with rivals, collect blocks of matching colours and build a bridge. Whoever gets to the finish line first takes the prize.

The game was released on August 25, 2022. Stick War: Hero Tower Defense climbed to number two in just one month on the chart. The game is a combination of action, strategy and combat puzzles that will test the gamer’s intelligence and pump up critical thinking. You, too, can evaluate the product of Rocket Game together with 13 million users.

Another game from Supersonic studio. Going Balls is a platformer in which the player controls a rolling ball. Unexpected obstacles, gradually increasing difficulty levels, and personal customization makes the game attractive to many gamers.

Snake Lite from the Hippo Lab studio. A fun and addictive game from the io genre, where the gamer controls a snake and collects «nutritional» power-ups to grow. The game provides an arena in which only one snake will remain. Download and test your strength; maybe you are the one snake lord!

The game aims to mould snowballs and overcome obstacles faster than other users. Summer has already passed, but winter has not yet arrived. Snow Race is a great way to prepare for winter and remember how to handle snow.

Tall man Run is again a top game from Supersonic Studios. This time it is a render in which the gamer’s goal is to lead the most elevated and fattest character to the finish line, overcoming interesting and unusual obstacles.

Coffee Stack was released on November 16, 2021, and is a render in which the gamer controls cups of coffee. A lot of cups, types of coffee and a variety of drinks will not leave any coffee lover indifferent.

This is a game from CrazyLabs studio. Dessert DIY is a paradise for sweet lovers and those interested in trying their hand at pastry making: exciting mechanics and a lot of decorative elements: icing, sprinkles, cakes and ice cream. The game will be to the taste of even the most sophisticated lover of sweets.

The racing game from the studio SayGames will test the stamina and reaction of gamers with various obstacles and unexpected levels. Do not let the opponents’ cars close; otherwise, you will get off the track and have to start again.

A game from MondayOFF studio was released on June 14, 2022. Gun Head Run is controlled with one finger, and the aim of the game is quite prosaic: as the player moves along the track, he picks up boosters and valuable perks, passes through gates that help or complicate the level, and collects points to improve weapons for the next race.